[Welcome to my blog.  My blog postings are a way to help men and women understand and appreciate the Old Testament theology, people, places, and stories.]

The Old Testament Book of Ruth is full of lessons and teachings.  One such lesson is how kindness and mutual respect between couples can change future generations. 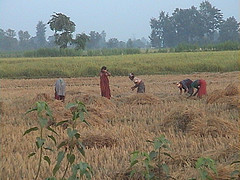 Dan and Mary (not their real names) were married in 1959 at 18 years of age.  They are in their late sixties now.  They told me their story of what they wanted in a marriage when they were dating each other.  Both wanted something definitively different from the marriages of their families of origin: generations of alcoholism in Dan’s family and mistreatment of women in Mary’s family.  “In our day”, Mary said “it’s called domestic violence.”

Mary’s family didn’t have the drinking problems found in Dan’s family, but both knew they didn’t want drinking or abuse in their marriage.  Dan said, “What helped us a lot was going to church as a family and making some good friends.  Our friends are honest, kind, and generous.  We love them.”

Couples like Dan and Mary intentionally want to have a life different from the lives their parents and grandparents led because it is too emotionally painful to continue in similar behaviors and beliefs.

The Book of Ruth in the Old Testament is set in the time of the Judges (Ruth 1:1) and ends with the mention of King David.

The context of Ruth’s story is given in the opening lines: “In the days when the judges ruled, there was a famine in the land, and a certain man of Bethlehem in Judah went to live in the country of Moab, he and his wife and two sons.  The name of the man was Elimelech and the name of his wife Naomi, and the names of his two sons were Mahlon and Chilion; they were Ephrathites from Bethleham in Judah.  They went into the country of Moab and remained there.  But Elimelech, the husband of Naomi, died, and she was left with her two sons.  These took Moabite wives, the name of one was Orpah and the name of the other Ruth.  When they had lived there for about ten years, both Mahlon and Chilion also died, so that the women was left without her two sons or her husband.”

A women alone could easily suffer or even die without a husband or family to support her.  Afflicted by famine and alone, Naomi heard “that the Lord had consideration for his people and had given them food” (Ruth 1:6).  Naomi returns to Bethlehem with one daughter-in-law, Ruth, who eventually marries Boaz, Naomi’s cousin, who by Israel’s law was obligated to marry her.  Their marriage produced an heir (Obed) who was the grandfather of King David.

Ruth and Boaz’ family tree of descendants is surprising.  Members of both families used trickery and deceit to secure the family line.

Ruth is a Moabitess whose ancestor was Moab.  Moab was the child born to Lot (Abraham’s nephew) and his daughter (Genesis 19:30-38).  This incestuous union occurred because Lot’s two daughters thought they were the only ones to survive on earth after the destruction of Sodom.  So they got their father drunk and had intercourse with him; each of them had a child.  One was Moab, Ruth’s ancestor.

Boaz had a similar ancestor in Perez, the son of Judah and Tamar.  Tamar was Judah’s daughter-in-law.  Tamar’s husband died and Judah did not provide a Levirate husband for her.  Continuing the family name is very important in Israelite society.  Tamar, in her desperate attempt to preserve the family line, tricked Judah by playing the harlot (Genesis 38:14-30).  She gave birth to Perez, Judah’s son.

Ruth and Boaz were loyal, respectful, and kind to each other and to their family members, both living and dead.  They did not repeat the trickery and deceit of the past ancestors.  They changed the course of their future generations by avoiding deceit and trickery.

Dan and Mary raised six children and have many grandchildren.  None of  their descendants have repeated the destructive behaviors of their grandparents and great grandparents.

2.  Support.  Is there any unfinished business you need to deal with?  Make a list.  What support do you need to get through the challenges and pain?  For example, do you need the help of another family member, a pastor, and/or a counselor?

3.  Action.  Create an action plan and timeline to help you resolve what is unfinished with your ancestors.

Ruth and Boaz prepared the way for the next generations through their goodness and mutual respect for each other.  Dan and Mary were able to influence their children and grandchildren through choosing a different set of values and beliefs.

In the story of Ruth there is death, grief, loss, disappointment, and adjustment to a new religion, land, and people.  There is also a happy ending.  From Ruth’s marriage to Boaz, a boy child is born who carries the family name and a faithfulness to the God of Israel into the next generation.